Enter your zip to see mobile providers in your area.

T-Mobile’s 5G network is the fastest and most widely available 5G you can get. The “Un-carrier” delivers faster speeds than other 5G providers, with users hitting an average of 150 Mbps on 5G phones.1 T-Mobile’s long-range version of 5G is available to 305 million people in all 50 states.2

In addition to cellular access, T-Mobile also has a new home internet service based on 5G. It costs a flat fee of $60 per month and gives you an average of 100 Mbps speeds and unlimited data.

T-Mobile is truly taking the lead on 5G. So, how can you get it? And how much does it cost? We’ve got the details about T-Mobile’s 5G network right here.

Still not sure what 5G is all about? Take a look at our 5G providers page for a full explanation.

*This measures the percentage of time cellular customers connect to 5G during phone use.

All in all, T-Mobile’s 5G is way faster and much more widely available than what you can get from Verizon or AT&T. T-Mobile has a leg up against its main cellular rivals thanks to a 2020 corporate merger with Sprint, which has given it a much larger wireless footprint. It’s also the only carrier right now with a proper mid-band 5G network, which delivers speeds upwards of 350 Mbps in dozens of major cities and large towns, including modestly sized locations like Ithaca, New York; and Medina, Ohio.3

However, T-Mobile doesn’t have C-band 5G coverage, which may put it at a disadvantage as AT&T and Verizon have both been building up C-band network access starting in 2022. C-band is a type of radio spectrum that promises incredibly fast speeds over a wide area—it’s the stuff that gives 5G a proper boost over 4G. But T-Mobile won’t have C-band until the end of 2023, as per government regulations.

How widely available is T-Mobile 5G?

T-Mobile 5G is widely available, but customers in areas with T-Mobile 5G access it only a third of the time spent on their phones. (When you’re not on 5G, your phone reverts to the 4G network.)

Put in your zip code to find mobile internet providers available in your area:

T-Mobile Home Internet is a home internet service that’s available to millions of Americans in 49 states. It costs $50 a month and works on a fixed-wireless connection, delivering an average of around 100 Mbps speeds on 5G networks (and 4G where 5G isn’t available).

T-Mobile Home Internet emphasizes straightforwardness, challenging cable and fiber providers with a simple pricing model and relatively fast speeds. The monthly fee includes equipment and installation costs, so there’s no hidden fees or seasonal price hikes. You also get unlimited data and you don’t have to sign an annual contract.

This is still a relatively untested internet service—cable and fiber options are far more well-known and many customers will consider them a better bet. But it’s definitely worth trying out. And if you don’t like it, you can just cancel without having to pay any fees.

One major advantage of 5G residential internet is that you can get much faster speeds and lower lag. Use our How Much Internet Speed Do I Need? Tool to gauge how much firepower you’ll need over wireless Wi-Fi.

T-Mobile’s 5G network reaches 305 million people across 1.7 million square miles.2 It’s available in thousands of cities in all 50 states. By most accounts, T-Mobile has the most widely available 5G network currently operating in the United States.2

To see whether T-Mobile 5G is available in your area, type your location into T-Mobile’s online 5G coverage map. You can also look at T-Mobile’s coverage map below.

How do you get T-Mobile 5G?

To get on T-Mobile’s 5G network, you need a 5G phone or 5G mobile hotspot along with a T-Mobile cellular plan.

All of T-Mobile’s unlimited-data phone plans allow you to access the 5G network. On any T-Mobile unlimited plan, you get access to the company’s 4G LTE network by default. You can also get on 5G service when you’re in range of the new service.

Data as of 2/21/2022. Offers and availability may vary by location and are subject to change.

Keep in mind that you may not be connected to 5G all the time, since T-Mobile is still expanding its service availability. According to a January 2022 report from mobile analytics firm Opensignal, T-Mobile’s wireless customers spent about 35% of their phone time connected to the 5G network.1 The rest of the time they were on 4G LTE. 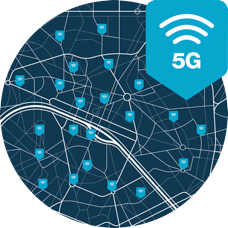 *Percentage of time users connect to 5G during phone use

T-Mobile’s 5G network delivers average download speeds of 150 Mbps.1 That’s a whole lot faster than the speeds of its rivals—and way better than what you can get on any 4G connection too.

How fast is your phone data?

Not sure what kind of speeds you’re getting with your cellular plan? Take our speed test to see if you’d benefit from a 5G boost.

How fast will T-Mobile 5G be in the future?

T-Mobile’s 5G network has the potential to hit 1,000 Mbps or faster, so long as it achieves benchmarks in building out its mid-band and millimeter-wave 5G infrastructure.

T-Mobile has also been rolling out more mid-band availability. Mid-band frequencies like 2.5 GHz have a greater capacity for carrying data, making them way faster than low-band 5G. Mid-band spectrum also doesn’t have the extremely limited range of millimeter wave technology. Mid-band spectrum can’t reach millimeter-wave speed, but it can still deliver really fast speeds at a distance of several miles.

Data as of 2/21/2022. Offers and availability may vary by location and are subject to change.

5G phones are coming out hot on the market these days, and T-Mobile offers some of the most popular ones along with its phone plans.

You also may notice that the price of 5G devices has been trending downward. The first 5G phones cost upwards of $900, but naturally as the network technology develops and gains in popularity, more affordable models come out—including the relatively affordable new iPhone 12 mini.

If you haven’t quite figured out the finer differences between 5G and its older predecessor, 4G, read our 4G vs. 5G guide to get the details.

Enter your zip to see if there’s a wireless provider with 5G data in your area:

5G is likely in your area if you live in a large metropolitan area served by one of the three major cellular carriers (T-Mobile, AT&T, and Verizon) in the United States. However, as we point out on our 5G providers page, 5G is still growing and there’s limited access at the moment. Even if you can get on 5G, it will be only in certain areas in your city or town. If it’s not available where your phone is at, you’ll revert back to 4G LTE networks.

To know for sure whether 5G is in your area, type your location into T-Mobile’s 5G availability map, AT&T’s coverage map, and Verizon’s coverage map.

Where is 5G available?

5G is available mostly in select parts of large cities and towns across the country. But 5G networks are expanding every day, including into some rural areas and smaller markets. Within the next few years, it will likely be readily available nationwide. It may even be an option for home internet on par with cable and fiber internet.

What did the T-Mobile and Sprint merger mean for Sprint customers?

Sprint customers’ accounts have been rolled into T-Mobile accounts. You access your account online through T-Mobile’s website, and all of Sprint’s brick-and-mortar stores are now T-Mobile stores. You may also notice a decline in data speed if you have an older Sprint phone, since T-Mobile is requisitioning part of Sprint’s spectrum for 5G.3

How do I get 5G from T-Mobile?

To get 5G from T-Mobile, you’ll need a T-Mobile wireless plan and a 5G phone or hotspot that’s compatible with T-Mobile’s 5G network. You don’t have to pay extra or sign up for a special plan to access 5G over T-Mobile—when you have a 5G device, it will connect automatically to T-Mobile’s 5G network when it’s available. Otherwise you’ll be riding on T-Mobile’s 4G LTE.