Is your internet fast enough? Test internet speeds at your

Connecting to a server ...

Enter your ZIP to see internet speeds and providers available in your area.

Is your internet fast enough?

Keep in mind that these download speeds and their associated activities are guidelines. The actual speeds required for each internet activity may vary.

What do my internet speed test results mean?

Upload speed is how fast your internet connection can send data to an internet server. Most internet activities don’t require much upload speed, but some do. However, if you participate in an activity that does require high upload speeds, you’ll definitely notice if your internet is too slow.

Download speed is how fast your internet connection receives data from websites and other internet servers. Virtually all internet activities require download speed, but some use more than others. You’ll also need more download speed if you have multiple people using the internet at the same time. Keep both of these things in mind when choosing a speed that’s right for you.

To learn more about the the differences between upload and download speeds, check out our Consumer’s Guide to Internet Speed.

What internet speed do I need?

If your favorite show is buffering every two minutes while bingeing the new season, it’s a real fun killer. Getting the right internet speed will save you from that.

To get the best speed recommendation, use our “How Much Speed Do I Need?” tool.

Discover The Speed You Need

Why test your internet speed?

It could improve your internet experience.

Taking a speed test will tell you if your service is underperforming, and it can also troubleshoot issues on your network. If your internet speed test results are far lower than what you’re paying for, call your Internet Service Provider (ISP) to see if it can help you resolve the issue. If the problem persists, it may be time to switch ISPs.

You can also use a speed test to identify internet traffic patterns in your neighborhood. Try it during different times of the day and week to get a sense of when the most slowing occurs. Then you can use those patterns to plan your internet usage around high-traffic times.

It could save you money.

Paying for too much internet speed every month can cost you hundreds of dollars per year. If your speed test results are much higher than what you need, save money by switching to a less expensive package with a lower speed.

Do you have a business? Testing your internet speed is even more important for you.

Paying for more internet speed than your business needs isn’t smart. On the other hand, paying for internet that’s too slow hurts your business. Regular speed tests help you strike the right balance between speed and price.

If you’re ready to find a new internet plan, start by entering your zip to see the ISPs available in your area.

Why use our internet speed test?

Our internet speed test can access hundreds of internet servers around the world—most of them in the United States and Europe. When you start the speed test, it automatically selects the best server to execute the test based on your location.

Because we use a nearby server to execute the test, it keeps the results as accurate as possible. Internet tests that use distant servers can require your internet signal to travel farther than it normally would, making your results susceptible to interference and overblown ping rates.

How do internet speed tests work?

Different internet speed tests have different specifics, but the basic concepts are the same. To test download speed, the testing tool downloads a file or set of files, then measures how long the download takes to complete. They measure upload speed the same way, except in reverse. Most speed tests also test ping rate because they’re contacting the server anyway.

Internet speeds will almost always seem a little slower than they should because of IP overhead.

Internet speeds will almost always seem a little slower than they should because of IP overhead.

Internet protocol (IP) is the set of procedures that make the internet work. Under these procedures, when you send a message over the internet, your computer first breaks it down into tiny pieces of data called IP packets. To make sure all the packets reach the correct location and can be put back together correctly, your computer attaches a set of routing and reassembly instructions, called the IP header, to each packet as it’s broken out.

The total data in the file you send plus the data in the IP header of each packet is called the payload. So, sending a 10-megabit message will have a payload that’s a little more than 10 megabits. That means downloading a 10-megabit file on a 10 Mbps internet connection, will take longer than one second because you have to download the entire payload, not just the file. The extra time needed to upload or download that extra data is called IP overhead.

Internet speed tests download dummy files to measure download speeds. If your security software detects those dummy files as potentially harmful (which they’re not), it may try to block them with a firewall or other security measures.

If this happens to you, try turning off your security software for the duration of the test. Just remember to turn it back on after the test is done.

Understanding the basics of internet speed jargon goes a long way when choosing or troubleshooting an internet service or networking hardware.

Internet speed refers to how fast digital information travels through your internet connection. Internet speeds fluctuate, but with regular testing you can establish a base range. Internet speed is a type of transfer rate and is usually measured as a data rate in megabits per second (Mbps).

Bit rate is the speed that digital information moves from one device to another at any given moment as it’s happening. Bit rates can fluctuate, depending on the configuration of the data being transferred.

Bandwidth refers to the total transfer capacity of an internet connection. When Internet Service Providers (ISPs) advertise their connection speeds, they’re really talking about the bandwidth of their connections. That’s why they always say “up to” a given speed. That top speed occurs only when the connection is running at full capacity.

Throughput is the amount of information that passes through an internet connection or other data transfer point within a given time frame. It’s similar to data rate, but it’s a measurement of volume, not speed.

Latency refers to the time a signal takes to travel between your internet connection and the nearest (or designated) internet server.

Ping is the name given to a test signal sent from a location on a network to the network server and back.

Ping rate is the time it takes for a ping to travel to an internet server and back. It is the measurement of latency.

While latency, lag, ping, and ping rate all refer to slightly different aspects of the same phenomenon, they are often used interchangeably to refer to the whole concept of latency.

Bits are the basic unit of digital information. They are represented in binary code as a one or a zero.

A byte is eight bits. Measurements usually use bit-based measurements like those listed above. Data is usually measured in byte-based measurements. For example, you may see an ISP offer an internet service with 25 Mbps downloads and a data cap of 8 GB. That’s a download speed of twenty-five megabits per second and a monthly data allowance of eight gigabytes.

The amount of data that moves through a connection in one second defines the connection’s internet speed. Those speeds are usually expressed as megabits per second (Mbps), but the fastest networks use Gbps.

The 5 Fastest and Slowest States for Internet

Wondering where internet speeds are the fastest? Or maybe you want to avoid the states where loading websites is like watching paint dry? We can help.

We analyzed one million speed tests taken on HighSpeedInternet.com to find out which states have the fastest—and slowest—average internet speeds. Here’s what we found. 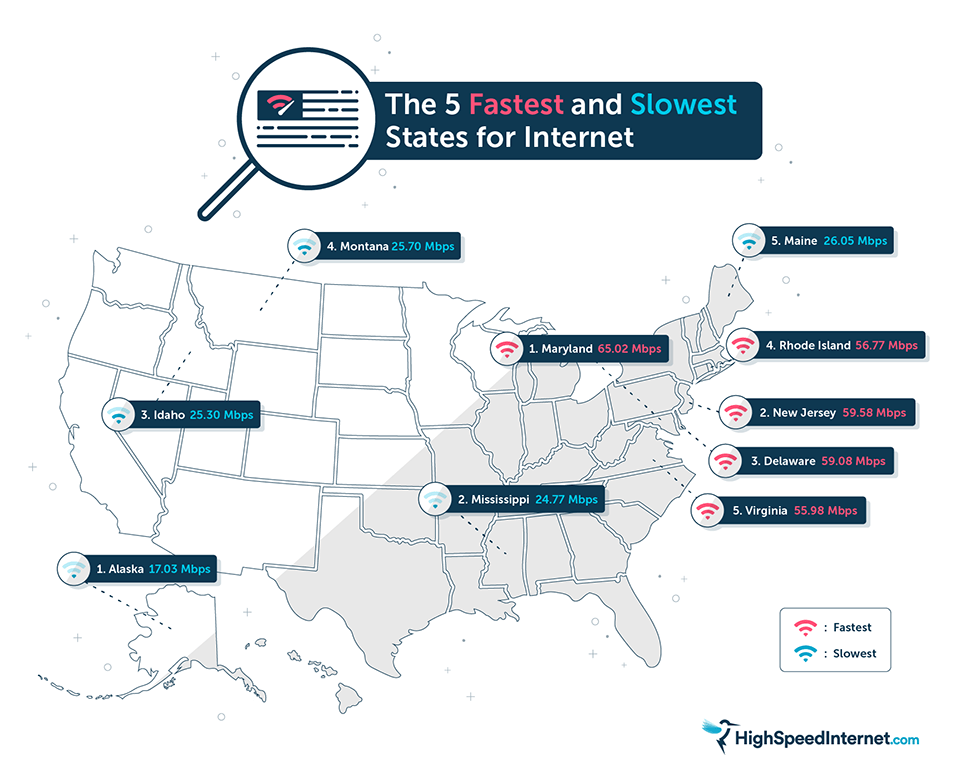 The 5 Fastest and Slowest Cities for Internet

Some US households have access to gigabit internet, which is fast enough to stream movies on 20 devices at the same time. Other households barely have enough bandwidth to stream a single YouTube video. So, which cities have the edge on speed? And which ones are lagging behind? 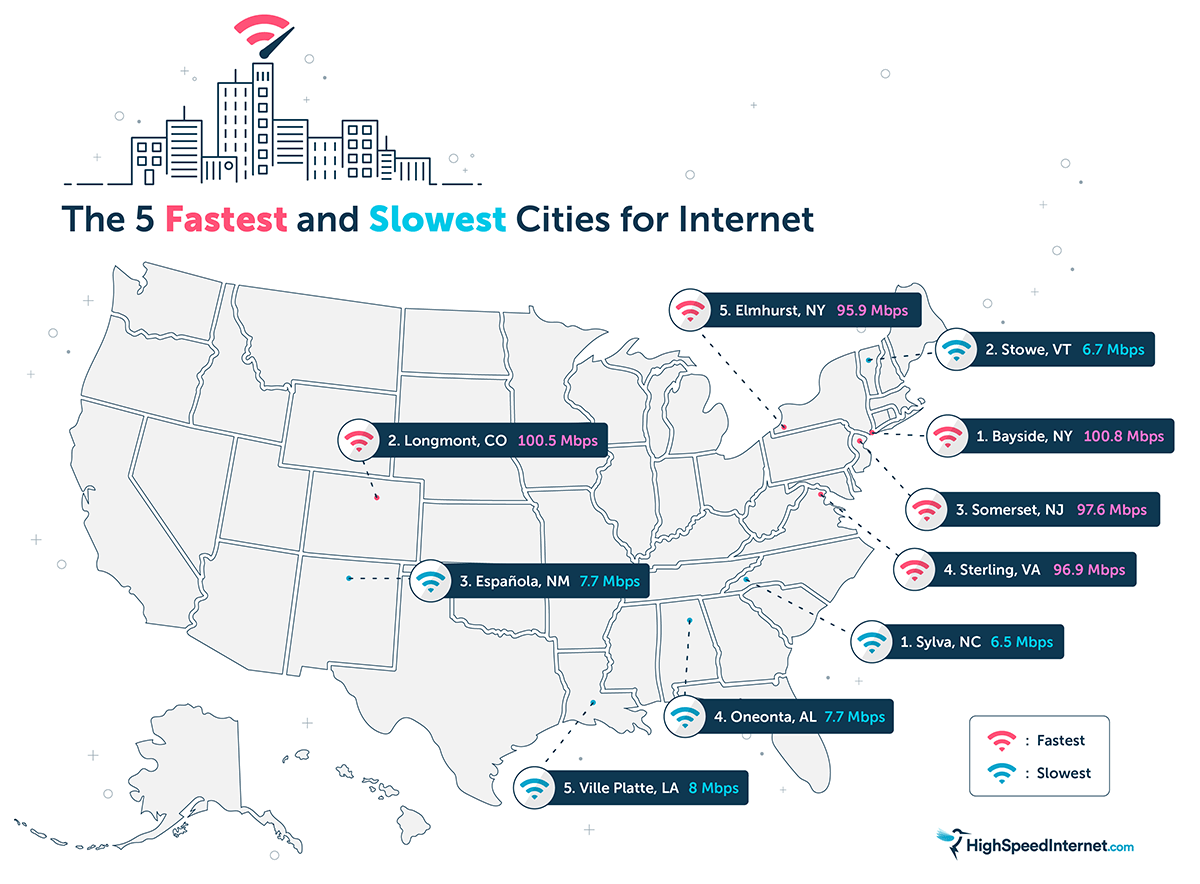 Our data analysts at HighSpeedInternet.com analyzed two million speed test results. They took the average of every city in the US and ranked them from fastest to slowest.

*Average of HighSpeedInternet.com speed test results for all provider’s users.

To learn more about internet speed and related topics like home networking, IP addresses, and the different types of internet, see “The Consumer’s Guide to Internet Speed.”

Compare ISPs available in your area and the speeds they offer by entering your zip.