Enter your zip to see providers in your area 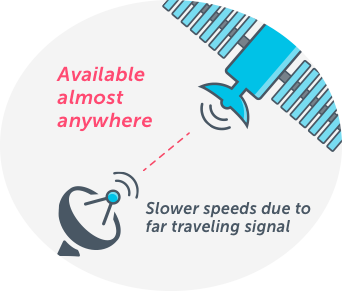 Satellite internet is available almost everywhere in the United States and to virtually 100% of the population. With stats like that, you almost certainly have a satellite internet provider in your area.

Unlike traditional internet that relies on cords and cables, satellite internet works by sending a wireless signal from the dish mounted on your house to a geosynchronous satellite in space. By always maintaining the same position in the sky, the satellite can beam your signal back to the provider’s network access point. Because this wireless method makes internet available anywhere you set up a dish, satellite internet is ideal for rural communities that lack infrastructure for DSL, cable, or fiber internet.

Is satellite internet a good option?

At least for now, satellite internet is a good option when it’s the only option. It tends to be slower compared to fiber, cable, or DSL internet, but there are some areas where you can get faster speeds from satellite internet than DSL.

Although data sent via satellite happens at a very high speed, the 44,000-mile round trip to outer space and back will understandably cause some latency. Latency, or lag, is the time it takes for data to travel. This is different than bandwidth (internet speed), which is the amount of data that can be transferred in a second.

Satellite internet companies have greatly improved their bandwidth, which has improved download speeds, but activities that require sending a lot of data back and forth—like online gaming—will still show notable latency. Still, even if it’s not the fastest internet around, what’s important is that it lets you log on even when you’re living far away from civilization in a rural desert or cabin in the woods.

What is the best satellite internet?

There are currently two household satellite internet providers to choose from in the United States: Viasat and HughesNet. Viasat is the best pick if you need fast download speeds and plenty of data. It provides a lot of options, ranging from low speeds at manageable prices to more expensive plans that deliver 100 Mbps speeds.

HughesNet is better known for straightforward, no-fuss internet plans. Prices stay more consistent, with no sudden price hikes shortly after the plan begins. However, its speeds top out at 25 Mbps, no matter which plan you choose.

Looking ahead, the next generation of satellite internet will be much better, and there will likely be more options to choose from as well. And there will be less latency (or delay) because the satellites will be orbiting at a much lower altitude.

The satellites will be in a low-Earth orbit (LEO) at 1,200 miles altitude, which significantly cuts down the distance the internet signal has to travel. Since the data won’t have as long of a trip to make, the latency will be much lower. Improved technology on newer satellites will also help solve (or at least improve) latency issues.

The buzz around satellite internet

There’s been a lot of interest in satellite internet lately. In early 2020, SpaceX founder Elon Musk unveiled plans to release what he called a “UFO on a stick”—an antenna terminal that will let people tap into high-speed internet beamed down from a fleet of LEO satellites orbiting the Earth.

Meanwhile, a top-secret team of engineers at Apple have reportedly been hard at work on a project to use satellites to blast data directly to your iPhone, iPad, or Macbook. Companies like SpaceX, Amazon, and OneWeb are launching satellites that will offer a new generation of internet service starting in late 2020. But hasn’t this satellite technology been around for years?

But the next generation of satellite internet will be game changing. Using advanced satellites in low Earth orbits, it will bring fast satellite internet with low latency to the whole world, including remote places that don’t currently have coverage. Best of all, these additions to the satellite industry will likely create more competition and may offer better prices and faster service.

The next generation in satellite internet service will start rolling out in late 2020. If you’re living in a rural area, the good news is that you don’t have to wait— you can get satellite internet through Viasat or HughesNet now. And in the future, you’ll have a few more options.

You can’t beat satellite internet for availability. It’s available almost everywhere. You just need a clear view of the sky and the property rights to have a satellite mounted.

While satellite internet is faster than dial-up, it’s not as fast as cable or fiber.

The long delay in signal makes it difficult to play fast-paced, multiplayer online games like Fortnite or League of Legends. Video streaming sometimes has hiccups too.

Satellite internet plans usually have monthly data caps. If you reach the cap, your data speed will be reduced or you’ll be charged for additional data (depending on your plan).

Satellite internet has its downsides though. In addition to monthly data caps that make steady video streaming impractical, the high latency can be frustrating. Satellite is also more expensive than other types of internet. Because of these downsides, we recommend that you check for wired options like DSL, fiber, or cable before signing up for satellite internet. If you don’t have wired options in your area, satellite is a solid alternative to dial-up internet and is often the best choice for rural areas.

Need internet and TV? We’ve got you covered.

HighSpeedInternet.com helps you compare the most affordable satellite internet providers by ZIP code. You may have noticed that even satellite internet companies advertising “unlimited data” still have a data cap, which means that streaming Netflix all day just isn’t going to work.

If you’re looking for satellite TV, too, so you can save on internet data, just be aware that neither Viasat nor HughesNet offers television service. You can choose from two satellite television providers: DISH and DIRECTV.

Find satellite providers in your area:

What should I consider when searching for a TV provider in my area?

The great thing about satellite TV is that you can receive service regardless of where you live. From city dwellers to farmers, it’s available to everyone. All that’s required is the manufacturer’s equipment and undisturbed reception.

However, it is important to consider the differences between the providers. Pay attention to the various services, equipment essentials, and reviews for each provider. In the end, it’ll come down to whichever company offers the features and channels you’re looking for.

Do I need satellite TV?

So how much data will you need? According to a report from Telecompetitor, the average American household uses 209.5 GB of internet data per month. Households who use streaming as their only TV service use on average 395.7 GB per month. So we recommend that you get TV service to minimize data usage.

Both DIRECTV and DISH offer great options. Their packages are wide ranging with varying prices and promotions. DIRECTV offers a variety of TV packages with up to 330+ available channels, as well as Spanish TV packages with more than 110 available Spanish-language channels.

Like most TV companies, DIRECTV also offers a myriad of add-ons, including a selection of premium content like HBO®, STARZ®, and SHOWTIME®. One of DIRECTV’s most popular features is NFL SUNDAY TICKET, which is by far the best way to watch professional football.

It covers every out-of-market game in HD and allows you to watch up to eight games simultaneously. You can also upgrade to NFL SUNDAY TICKET MAX, which allows you to stream live games on your phone or tablet on the go, making this is an unbeatable option for sports fans.

On the other hand, DISH offers four English TV options with 290+ available channels. Some smaller packages are less expensive than comparable DIRECTV packages, which is especially nice because DISH keeps its prices the same for two years, while DIRECTV will raise them on customers after one year.

Need to know more? Rean an in-depth comparison of DISH and DIRECTV.

Can I get satellite TV for free?

You can get hundreds of satellite TV channels for free using a Free-to-Air satellite receiver. Also known as an FTA receiver, they let you tap into unencrypted transmissions from satellite operators, giving you free and legal access to a variety of international news, sports, and entertainment channels.

To access FTA channels, you’ll also need a satellite dish and a coaxial cable to connect to your receiver. You’ll then connect the receiver to your TV.

Just keep in mind that setting it all up can be costly. Free-to-air satellite channels also may not give you the same selection of premium programming that you’d get from a paid subscription through DIRECTV or DISH. If there are specific channels you’re looking for, it may be easier sticking with them.

*Worried about that data cap? Satellite internet does require a bit of data budgeting, even if they technically offer unlimited data. After you reach the monthly data cap, your data speeds will be slowed down (or “deprioritized” as the ISPs call it). So how much data will you need? According to a report from Telecompetitor, the average American household uses 209.5 GB of internet data per month. Households who use streaming as their only TV service use on average 395.7 GB per month. So we recommend that you get TV service to minimize data usage.

Other options for rural internet

Satellite internet is your best option for rural internet, but more options may be on the horizon. The expansion of fixed wireless, next generation satellite internet from companies like SpaceX, and 5G technologies will soon bring additional internet options to some rural areas.

As these new services become available, we’ll continue to update our database to show you all your options. For more information on these emerging technologies, see our page about rural internet providers.

Will 5G work in rural areas?

5G is expected to bring lower latency to mobile internet in rural areas and facilitate major innovations in rural industries like agriculture.

Not all types of 5G technology will make an impact in America’s heartland. The strongest form of 5G delivers a millimeter-wave signal that’s designed for relatively contained, high-density geographic areas like stadiums and public parks. So, it likely won’t be available in the countryside.

But there’s also a low-band version of 5G with a much wider reach. Low-band 5G is faster than 4G and will cut down drastically on the latency and lag that internet users in rural areas usually deal with when they can only get satellite internet.

Lower latency on a 5G network could make streaming go a lot smoother at home. It’s also expected to allow for nifty new advances, like wireless sensors to monitor crops in farmers’ fields.

5G isn’t widely available in rural corners now, but it could be soon. T-Mobile and Sprint have committed to setting up 5G for 85% of the country’s rural population within three years of their planned corporate merger, which was approved in November 2019 by the Federal Communications Commission (FCC).