Nonstop Horror: Get Paid $1,000 to Watch 24 Hours of Horror Movies This Halloween 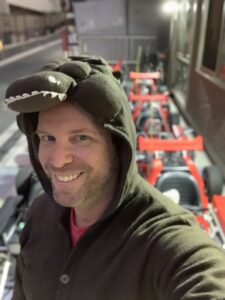 We’re paying Tom $1,000 this Halloween to watch a 24-hour horror movie marathon. Though he’s a huge horror fan, Tom admits he hasn’t seen many horror movies since the late nineties because his wife is a scaredy cat. Let’s hope he can keep his wits about him while he catches up on the past two decades of slasher films and found-footage flicks.

Keep up with Tom’s 24-hour horror movie marathon on Twitter @TomCroom and check out his bio below.

Tom Croom is a self-proclaimed “Gen-X geek” whose passion for pop culture thrust him into a career of professionally running anime/comic/video game events for a living. When he’s not on stage or running around a convention center, Tom enjoys watching films no one has heard of, playing a variety of video games, visiting food locations featured on popular TV shows, and writing endlessly about all of it on his blog: TomCroom.com.

Halloween is fast approaching, and while some folks are figuring out how to save trick-or-treating with socially distant candy slides, many are opting out of the usual festivities in favor of staying in. So, why not get paid for it?

The dream teams at CableTV.com and HighSpeedInternet.com are partnering up to pay one lucky horror flick aficionado $1,000 to watch a nonstop, 24-hour movie marathon on a streaming service of their choice.

If a night of #nosleep, coffee, and gallons of fake blood sounds like more of a dream than a nightmare, this job is right up your (dark, abandoned) alley.

Who we’re looking for:

How you can apply:

Applications for this job have closed.

21. Promoter reserves the right to cancel or amend this Dream Job and these Terms and Conditions without notice.

22. Promoter’s decision in respect of all matters to do with the Dream Job will be final and no correspondence will be entered into.

23. The Dream Job and these Terms and Conditions will be governed by Utah law and any disputes will be subject to the exclusive jurisdiction of the courts of Utah.

24. By submitting an application for this Dream Job, applicants agree to be bound by these Terms and Conditions.