What is the best internet provider in Boston?

Verizon Fios fiber internet is the best option in Boston for reliable internet service, low latency, and fast upload speeds. But it’s available in only about half of Boston.

Xfinity’s 1,000 Mbps speeds are available to almost all Bostonians, but this cable ISP can run a little pricey, especially if you have the need for speed.

Astound Broadband is a bit smaller on a national scale, but offers decent coverage in Boston. Astound has some fiber internet coverage, as well.

Verizon is the highest-rated internet provider in Boston according to our annual customer satisfaction survey. Verizon took third place overall, but it was scored second-highest in all categories except customer service (where it was ranked third). Verizon customers rate it particularly highly for satisfaction with reliability—75% of customers surveyed reported that they’re “very satisfied” or “100% satisfied” with their internet in that category.

Xfinity and Astound Broadband are tied as the fastest providers in Boston, offering speeds up to 1,000 Mbps. Verizon is just behind with 940 Mbps. Although it technically ranks third in advertised download speeds, Verizon is the only one of the three to offer fiber connections, which means much faster upload speeds for content creators and those working from home.

Data effective as of 6/27/2022. Prices and availability vary by region and are subject to change. 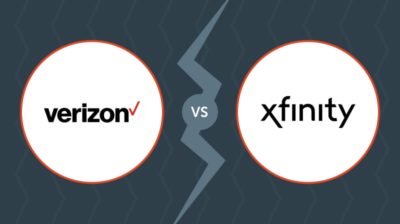 Xfinity has Wi-Fi hotspots all over Boston, but Verizon Fios offers much faster upload speeds. Read our comparison review to figure out which ISP is the better deal for you.

Read more about Verizon vs. Xfinity 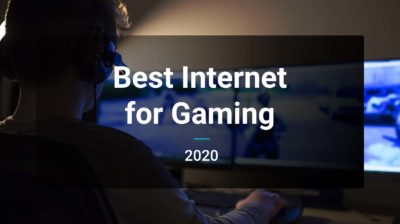 If you need high-performance internet for gaming (or anything else), check out why Xfinity, Verizon, and RCN get our stamp of approval.

Your Guide to Xfinity Installation

Leaning towards Xfinity internet? Let us run you through the pros and cons of professional vs. self-installation options.

Read more about Your Guide to Xfinity Installation

Data effective as of 6/27/2022. Prices and availability vary by region and are subject to change.

Verizon is the only provider to offer fiber internet connections in Boston. Fiber connections are important because they boast not only lightning-fast download speeds, but also have equally fast upload speeds. Upload speed is important for livestreaming, video chat, and many other online activities. Fiber is also one of the most reliable types of internet connection, which means fewer outages and other problems to worry about.

Through Verizon , about half of Boston has access to high-speed fiber internet. Verizon Fios is available in some central neighborhoods, including Back Bay, Downtown, and Beacon Hill. In the north, the ISP serves Charlestown and Allston. Southern neighborhoods in the Verizon Fios service area include South Dorchester and Mattapan. Verizon’s DSL network is slightly larger and covers the entire city.

Cable internet provider Xfinity has a significant presence in Greater Boston, bringing high-speed internet coverage to neighborhoods as far north as Charlestown and as far south as Hyde Park.

Astound Broadband has decent coverage areas around Boston and covers most of the central neighborhoods including Beacon Hill, Downtown, Chinatown, Leather District, Back Bay, and Fenway.

“The service is good. Polite and responsive in this area. Pricing is fair. Speed could be better, but do-able for basic streaming.”

“Blazing fast, no hassle, no downtime to date, and very little package pressure.”

How much does internet cost in Boston?

Prices for internet in Boston range from $20 to $100 per month. The sweet spot for the best balance of speeds versus price is around $40 per month (not including taxes and fees). Several ISPs offer 100–300 Mbps speeds for about $40 per month in Boston.

Is there fiber internet service in Boston?

Yes, there is fiber internet in Boston. Verizon Fios is available in just over half of Boston, including areas of Downtown, Beacon Hill, West End, and The Greenway.

What internet services are available in Boston?

Xfinity, Astound, Verizon, and Starry Internet are available in Boston, with speeds ranging from up to 7 Mbps to 1,000 Mbps. Run your zip code to find and compare internet service providers in your area.

Horrible! They canceled my service when new renters moved into my multi family unit without ever checking with me. Now they're charging me a cancelation fee instead of honoring when my original contract started. Just stay away!!!

Fast speed & excellent customer service. I've had no problems with Xfinity; and no, I don't work for them, nor did they pay me to write this review. The service is the payment. True.

Xfinity did the usual random extra service added to the bill at the one month mark even though I had declined all the trial options when signing up. I hadn't heard of starry before moving in but my neighbor gave me a 30 day trial code so i figured it couldn't be worse than comcast/verizon. I really liked it, I'm sad I apparently only have comcast as an option in my new apartment again. I was really surprised they didn't try and stick me with a rental fee for the router and a bunch of other fees, the actual amount that came out of my bank account each month was what the ads said. When they called in they said they might be able to serve my new building soon. Fingers crossed.